I’m just a simple man trying to make my way in the universe.

Originally produced for law enforcement purposes by Kuat Systems Engineering, the Firespray-class patrol craft is also a favorite of bounty hunters like Jango Fett, who use its robust chassis to add their own weaponry and modifications.

This expansion pack lets you put your personal touch on your own Firespray-class patrol craft painted in the colors of Jango Fett's Slave I. In addition to the miniature, you'll also find four ship cards in this expansion, including the infamous Jango Fett himself, along with 13 upgrade cards that let you customize your ship to fit your strategy. 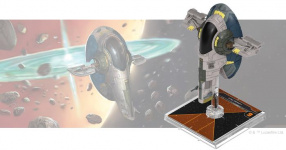