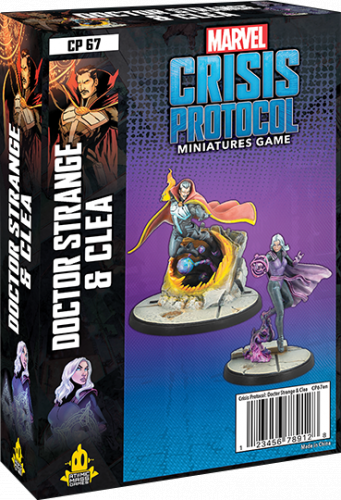 Doctor Strange returns to Marvel: Crisis Protocol alongside one of his most devout disciples! Forced to seek out new allies and a new source of power beyond the boundaries of Earth, this version of Doctor Strange bears the title Sorcerer Supreme. A powerful sorceress and student of Doctor Strange, Clea once inhabited the Dark Dimension inhabited by the evil Dormammu. Trained in the mystical arts by the Sorcerer Supreme himself, she is nearly his equal in her control over magic.

Marvel: Crisis Protocol - Doctor Strange & Clea adds these masters of the mystic arts to players’ rosters, featuring a new version of Doctor Strange with all new abilities. Brought to life on the tabletop by two beautifully detailed, unpainted miniatures, both Doctor Strange and Clea’s abilities make them powerful additions to the new Convocation affiliation while four Team Tactic Cards invite them to enhance their power with mystical artifacts such as the Book of Cagliostro and the Wand of Watoomb.