The ruler of the Dark Dimension enters Marvel: Crisis Protocol! One of an enigmatic race of beings made of pure mystical energy, Dormammu possesses patience that can be measured in eons; he has intelligence beyond reckoning and command of the mystical arts to match.

As the most imposing foe of Sorcerer Supreme Doctor Strange, he represents a threat to entire realms and this adds him to players’ Crisis Protocol rosters with a beautifully detailed, unpainted miniature along with a Nexus miniature and two dimensional rift miniatures. In addition to being a powerful addition to your team, this pack also contains everything you need to face off against Dormammu in a unique Ultimate Encounter. Do you have what it takes to halt Dormammu’s dimensional incursion before he can draw the universe under his control? 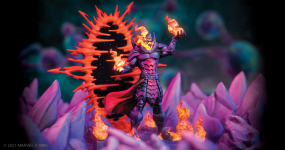